Journalists and journalism are waging a global struggle for survival and for “truth” against fake news and alternative facts, say two Asia-Pacific media commentators.

“Without journalists who will tell it like it is no matter the consequences, the future will continue to be one of alternate facts and manipulated opinions,” Rappler executive editor Glenda Gloria told about 135 media scholars, journalists and researchers at the opening of the Asian Congress for Media and Communication (ACMC) in Auckland this week.

“As we’ve experienced at Rappler, the battle to save journalism cannot be fought by journalists alone, and cannot be fought from our laptops alone. The battle for truth is a battle we must share — and fight — with other groups and citizens

“Each time our freedoms are threatened, we should have no qualms engaging other democracy front-liners and participating in collective efforts to resist authoritarianism.”

However, she told the virtual conference hosted at Auckland University of Technology (AUT) she believed that journalists had the motivation and enough understanding now to “stop the tide of disinformation” that fueled the spread of authoritarianism.

“In this environment, make no doubt: Journalism is activism,” added the award-winning investigative journalist and author who heads the digital website that has repeatedly angered Philippine President Rodrigo Duterte with its exposés.

Dr Robie cited how authorities in PNG had been forced to abandon mobile health clinics and teams of health workers carrying out covid-19 vaccination and awareness programmes because of the increasingly risky attacks against them.

He said much of the content used by anti-vaxxers and conspiracy theorists which framed the covid-19 response as a fight between the individual and the allegedly “treacherous” state had been repackaged from US and Australia vested interests.

Dr Robie said universities could do far more in the fight against disinformation and praised initiatives such as the RMIT fact-checking collaboration with the Australian Broadcasting Corporation (ABC), The Conversation news and academia project, The Juncture journalism school website, and the new Monash University backed 360info wire news service.

“The challenge confronting many communication programmes and journalism schools located in universities or tertiary institutions is what to do about authoritarianism, how to tackle the strain of an ever-changing health and science agenda, the deluge of disinformation and the more rapid than predicted escalation of climate catastrophe,” he said. 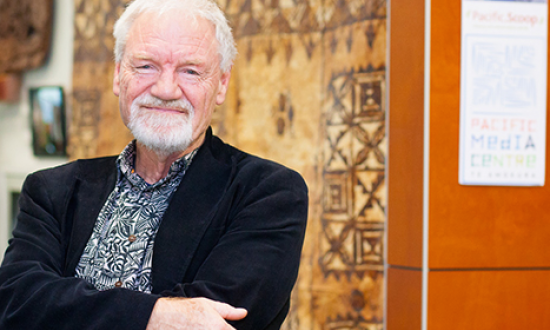 Prof David Robie is a New Zealand author, journalist and media educator who has covered the Asia-Pacific region for international media for more than two decades/ photo AUT

“One of the answers is greater specialisation and advanced programmes rather than just relying on generalist strategies and expecting graduates to fit neatly into already configured newsroom boxes.

“The more that universities can do to equip graduates with advanced problem-solving skills, the more adept they will be at developing advanced ways of reporting on the pandemic – and other likely pandemics of the future – contesting the merchants of disinformation and reporting on the climate crisis.”

Dr Robie, who was awarded the 2015 AMIC Asian Communications prize, pioneered several student journalist projects in the region such as intensive coverage of the 2000 Fiji coup and the 2011 Pacific Islands Forum, and more recently the 2016-2018 Bearing Witness and 2020 Climate and Covid project in partnership with Internews.

Journalism Nobel Peace Prize
Glenda Gloria said her entire editorial team had been delighted when their chief executive Maria Ressa was awarded the Nobel Peace Prize – along with Russian editor Dmitry Muratov. Ressa was the first Filipino Nobel laureate and “some of us started calling our office the Nobel newsroom”.

“This immense pride that we feel isn’t just because Maria is our CEO, it is that the prize went to two journalists who have faced the toughest challenges imposed by authoritarian states,” Gloria said.

“More than that, the Nobel prize puts a global spotlight on the extraordinary dangers that we journalists face today.

“To many of us in the Global South, journalism has always been considered a dangerous profession long before media watchdogs started ranking countries around the world according to the freedoms enjoyed by their press.

“And yet, despite all that we have seen and experienced, it’s no exaggeration to say that this is the most challenging period for journalism.

“At stake today is our very existence, our relevance, and our ability to speak truth to power.”

The conference was opened following a traditional mihi by AUT’s acting dean of the Faculty of Design and Communication Technologies, Professor Felix Tan, and ACMC president Professor Azman Azwan Azamati of Malaysia.

Master of ceremonies duties are being shared by AUT’s Khairiah A. Rahman, the chief conference organiser, and Dino Cantal of Trinity University of Asia.

More than 40 media and communication research papers are being presented over three days with the conference ending on Saturday afternoon.